Marriage in Pakistan is a legal union between a man and a woman. Culturally, it is not only a link between the husband and wife, but also an alliance between their respective families. Because about 97% of Pakistan's population is Muslim the Islamic law is usually observed.

Polygyny: Polygyny, the act of one man having multiple wives, is permitted under Pakistani civil law under the Marriage Act of 1965, (the Pakistani Family Act) up to a total of four wives, with the stipulation that the first wife gives attested written permission. However, it is now less common, especially in urban areas. If a married man remains childless with his first wife, family members might recommend to marry a second wife. However, polyandry, the act of one woman having multiple husbands, and group marriages, known these days as polyamory (meaning multiple husbands and wives partners), are not permitted.

Arranged Marriages: Arranged marriages have been an integral part of Pakistani society for years and are still prevalent. Marriages are often arranged within the family or within the same community or ethnicity. Social and educational status are very important in arranged matrimonial alliances. However nowadays, love marriages are slowly becoming more common and acceptable in Pakistan. Arranged matches are made after taking into account factors such as the wealth and social standing of their families. A marriage can also be made within the extended family such as between cousins.

Marriage Process: Arranged marriages in Pakistan often take long periods of time to finalize. The time from preparation until wedding day may be more than a year. When the wedding date approaches, all close relatives are invited for a typical Pakistani wedding that requires a considerable budget in order to accommodate them. In some cases, wedding dates are even postponed until the important relatives are able to arrive to the location of the reception from abroad. The wedding customs and celebrations also differ significantly depending on the geographical location as well as the families involved. However, a typical Pakistani wedding has at least three main customs involving the Henna ceremony (Rasme Henna), the vows or the Nikah which is a part of the actual wedding or Shaadi ceremony, and a subsequent Walima offered by the groom's family.

Proposal Party: A proposal party is a reception made in the bride's house, where the groom's parents and family elders formally ask the bride's parents for her hand in marriage. In religious families, once the wedding proposal is accepted, the families read Surah Al-Fatihah, and then tea and refreshments are served. Depending on individual family tradition, the bride-to-be may also be presented with an item of jewelry and lots of gifts.

Engagement: An engagement (Mangni) is a formal ceremony to mark the engagement of the couple.It is usually a small ceremony that takes place in the presence of a few close members of would-be bride's and groom’s families. Rings and other items of jewelry among affluent families are exchanged between the would-be bride and groom. Traditionally, the bride and the groom were not seated together, and the rings are placed on the bride's finger by the groom's mother or sister, and vice versa. In recent years, however, segregated functions have become a rarity and rings are usually exchanged between the couple. Prayer and blessings for the couple are then recited, and the wedding date is decided.

Dholki:
When you hear about “Pakistani wedding”, colors, music, beautiful dresses, noise, enjoyment and fun, all come in your mind at once. The events planning begin months before the wedding. Pakistan is like a basket of flowers, where flowers of different casts bloom. Every cast has their own culture and tradition to celebrate this auspicious wedding occasion. People in Pakistan enjoy the wedding ceremonies to the fullest. Wedding is a package of different events in Pakistan. Like Dholki, Mayoun, Mehndi, Nikah and Walima. The celebrations begin with the “Dholki”. Dholki started a week or two before the Nikah ceremony. It is named after “Dholak” or drum. As the name says, young girls and boys of the groom or bride family gather and sing songs on Dholak. They enjoy while singing and dancing on songs. Before getting married and starting a new life in a new environment Dholki is a fantastic way of get together with friends and relatives to sing and dance and spend a memorable time.

Now a day’s people have multiple dholkis, hold by the families of bride and groom themselves. Friends and cousins select songs and choreograph the dances and the youngsters practice the songs which they are going to sing on the mehdi ceremony, while the aunts and elders sat and chat about wedding day. The couple’s families prepare food for the guests and the fun and party goes on late. During dholki nights, sweet fried balls made from flour and sugar called “Gulgulay” have also been served as a traditional food in some families.

The youngsters bring in their creativity and specially decorate a room with flowers, buntings, doppatta and balloons, where they celebrate dholki and the bride to be spend her time from dholki till the wedding day.  During the dholki, Ubtan is being applied on bride, as a tradition to add a glow to her bridal look. 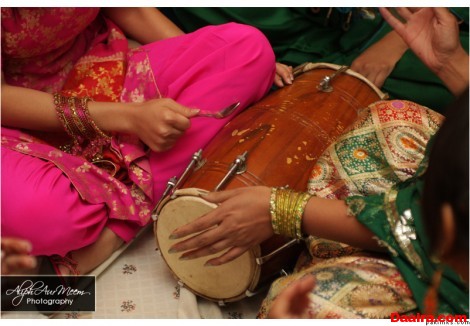 Dholki: The Dholki or Dholak celebration takes its name from the percussion instrument Dholki, which is featured heavily during this wedding celebration. Traditionally, many days or even weeks before the actual wedding day, women will gather in the house of the bride at night to Sing and Dance while accompanied by percussion instruments. Today, this ceremony has also been reduced to a single night of singing and is often combined with Mehndi or Henna ceremony. 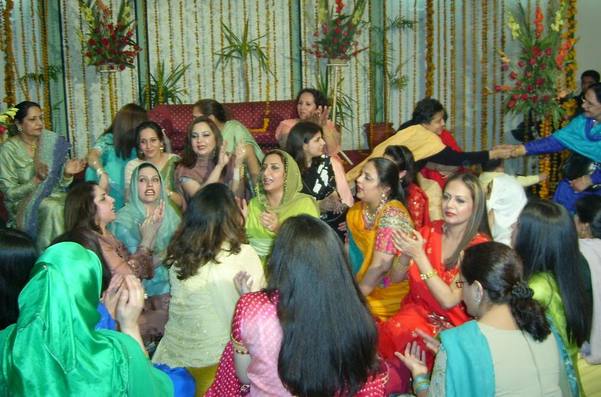 Maayun: A maayun is custom of the bride entering into the state of seclusion before the wedding. In earlier centuries this would last eight to fifteen days, which, being no longer practicable, last now for a night. The bride and the bridegroom are made free of all the chores and errands around the house. The bride and groom are not allowed to see each other after the initiation of the period and the bride is not allowed to leave her house, particularly after sunset. The beautification rituals begin during this time.

Ubtan turmeric paste, sandalwood powder, herbs, and aromatic oils are traditionally brought by the women of the groom's household for the bride. She blesses bride and applies “ubtan’ to the bride's hands and face. Groom's sister also does the same, and a thick string called a “gana” is tied to the bride’s arm. “Ubtan” is applied to the bride's skin each day leading up to the wedding. Similar ceremony is held for the groom, where bride's mother, sisters, cousins and friends bring “ubtan” for groom and rub it on his skin.

The ceremony is often brought to a close by the members of the household playing ubtan whereby it is brought in huge trays and throw at each.

Mehndi: Mehndi , the Henna ceremony, or the Rasm-e-henna ceremony, typically takes place one or two days prior to the main wedding day. The event is traditionally held separately for the bride and the groom The henna is symbolically placed on the couple's hands. The groom's friends and family bring along sweets and henna for the bride, and the bride's family does the same for the groom. In the bride's ceremony, the groom normally does not participate, and similarly on the groom's event, the bride stays at home. Female guests are sometimes offered mehndi at the host's discretion. 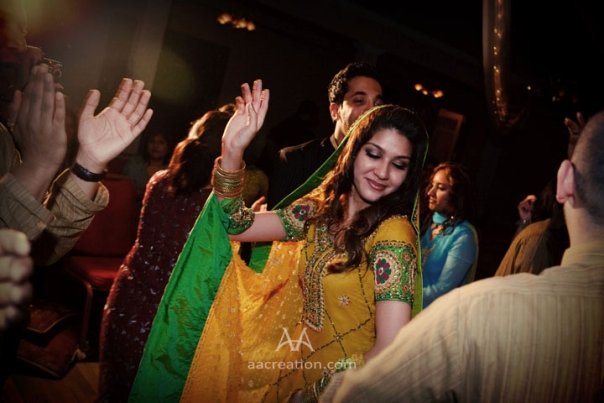 Traditionally, the Mehndi was considered a women's event and men did not participate in it. The sing song etc. was left almost entirely to women. However, this has changed substantially in recent times with males featuring prominently in the Mehndi celebrations as well. A recent trend gaining popularity is to announce a color theme for the mehendi whereby guests are supposed to dress up in a particular color. Commonly used colors are bright reds, oranges and yellows.the use of the term 'Tael' has diminished greatly. In some cases, the entire ceremony is instead referred to as "Tael Mehndi" (Oil and Henna) ceremony. 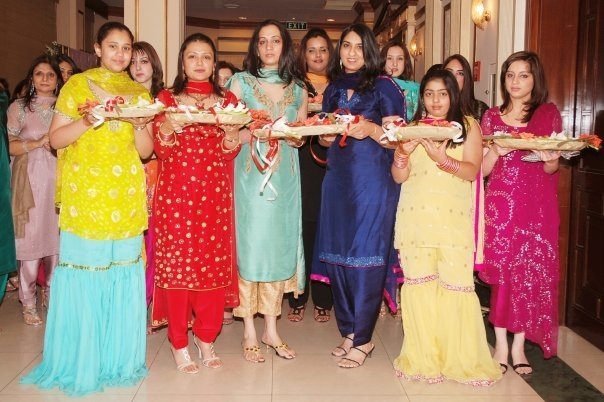 The bride normally wears a green dress or yellows/orange for the Henna celebration and uses only light, or mostly, no make-up. The groom will typically wear a casual Shalwar Qameez. The bride and/or the groom are brought forward in the ceremony under a decorative Dupatta by their close relatives. In the bridal ceremony, a certain number of married women who are closely related to the bride apply henna to her hands, and feed her sweets. This ritual is supposed to bring good luck and longevity to the bride's married life. Similarly, on the groom's side, Oil is applied to his head and sweets are fed to the groom.
A song competition also occurs in the Rasme Henna or Mehndi celebrations between the bride and groom's side. Young women and men will sing teasing songs about the other side (where the bride's side pokes good natured fun at the groom's side and vice versa) and try to compete in this ritual sing song. Sometimes elaborate musical and acting performances are part of the Mehndi celebrations. Elaborate dance sequences and competitions between the bride and groom's families are also quite common these days. 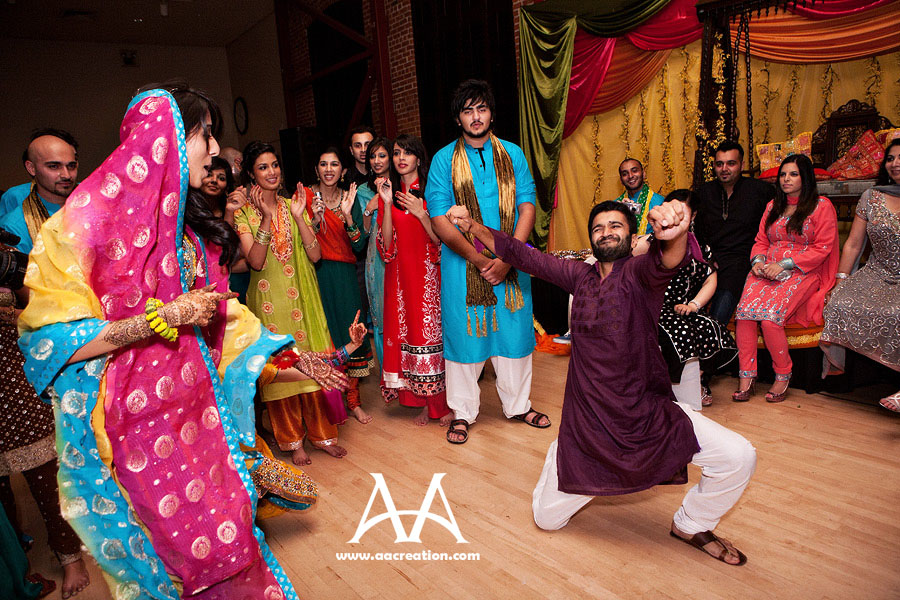 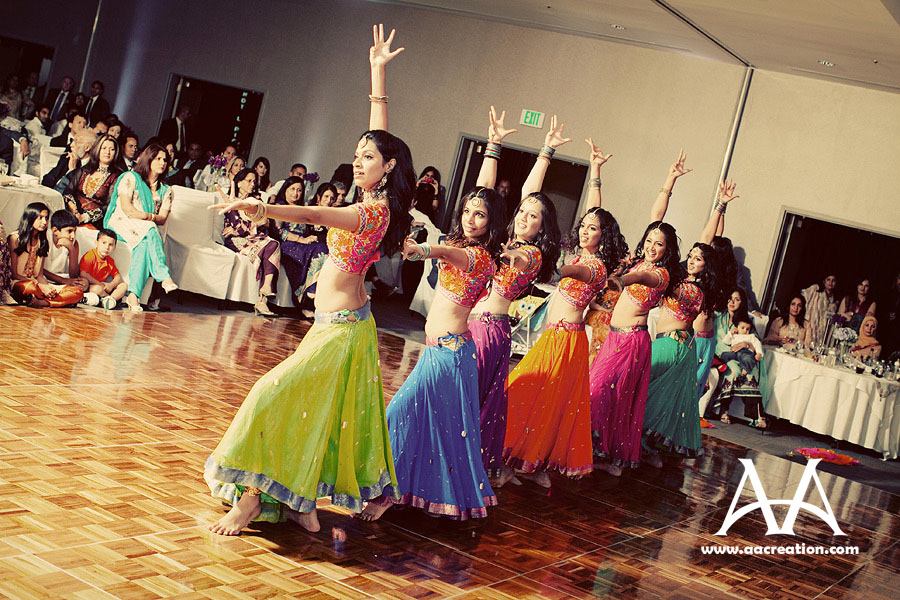 Barat: Barat is the procession of the family, relatives, and friends of the groom and they accompany the groom to the bride’s home for the official wedding ceremony. The groom makes his way to the bride's home on a richly decked horse or car and the “barat” follows in different vehicles. Usually they are also accompanied by a band playing wedding songs. The groom is given a warm welcome by the bride’s family with flower garlands and rose petals thrown upon the procession by the bride's sisters, cousins and friends.